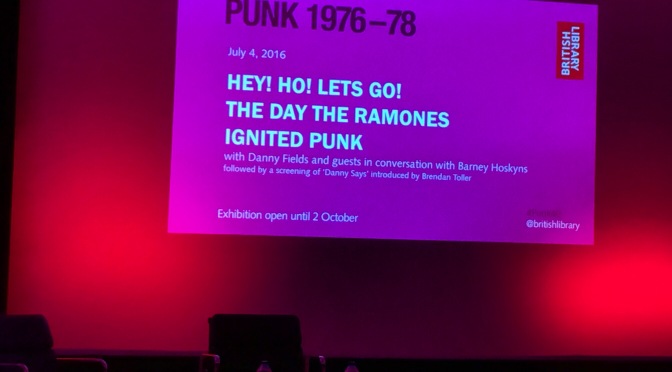 Sunset at Villa Thalia, Campbell’s new play at the National Theatre explores themes of modern times imperialism, capitalism, greed and democracy in Greece (and beyond). Set in late 60s Greece on the eve of military coup that would set the country in 7 years of military junta regime. The play struck a cord; I am Greek and know first hand of the hardship, exploitation and challenging political times that the country seems to be going through since its genesis.  But it also struck a chord because it couldn’t be more relevant to our recent times. This may be a play set in Greece but it is truly Universal.

London celebrates this year its 40th anniversary of the punk subcultural phenomenon with Punk London; a series of events, talks, exhibitions looking into the music, fashion, art and ideologies. As part of the celebrations, The British Library is hosting Punk 1976-78 including photographic exhibition, talks and film screenings. I recently attended Hey! Ho! Let’s Go!: The Day the Ramones Ignited Punk. The event honoured Danny Fields, a pivotal figure in the music industry (brought into mainstream the likes of Stooges, MC5 and Ramones, also worked with The Doors, Lou Reed) who took us through his career journey with key focus on Ramones’ success and the band’s introduction into London’s punk scene.

The evening concluded with a special screening of documentary ‘Danny Says’ which will be screening at Curzon cinemas later this year. It was an excellent evening and provided great insights into punk music and mostly the differences between the US and UK scene.